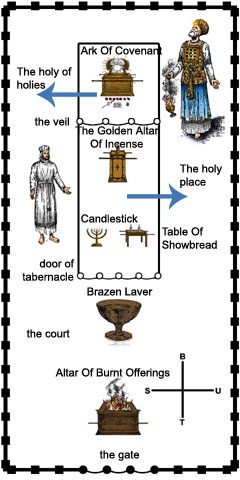 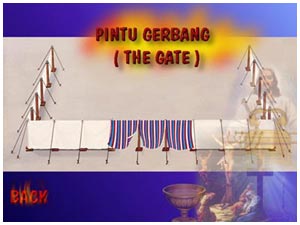 THE GATE OF the Court of the Tabernacle was a curtain 20 cubits long and 5 cubits high of:

It was supported by 4 pillars and stood upon 4 sockets of brass. All the pillars around the court were filleted with silver and their hooks were also made of silver.

The spiritual meaning of the GATE of the court is RECEIVING = BELIEVING in JESUS as the “HEAD” through the Gospel or the Word of God (John 1:12)

The HEAD = the savior of His Body or His Church (Ephesians 1:22-23)
The multi-colored curtain refers to Jesus portrayed in the four Gospels:

A curtain or covering of the same colors was to be found at the other 2 doors in the Tabernacle, namely The DOOR of the TABERNACLE and the VEIL.
The VEIL or COVERING (“that which covers” in Hebrew) indicates that there is something kept secret within. The Kingdom of Heaven is a secret (Matthew 13:11), which, however, is revealed to anyone who believes in or opens his heart to Jesus through His Word.

Contact to info@gptkk.org if you have any questions or if you want to subscribe Manna magazine, dan contact to widjaja_h@yahoo.com if you want to have a private consultation with our pastor.